Linear parks and urban ambiances: Emerging concept to enhance the quality of life in informal settlements

Linear parks and urban ambiances: Emerging concept to enhance the quality of life in informal settlements

« Water is life! » Water is a vital and refreshing component of our lives. It is a precious resource for its aesthetic and environmental qualities. Yet, this “natural” element is challenged by its rarity and scarcity in certain regions where hot and arid climate prevails. This threat makes it a major concern in future studies and indeed deserves special attention. We are addressing this interest in water from an urban perspective. Cairo was chosen as a case study to analyze the sensory relationship between the city and the scarce and underutilized water resources.
Revealing a sort of abundance, the gigantic megalopolis of Cairo encroaches, in her sprawl, over green and earth. Apart from the River Nile, we are interested in the irrigation and drainage canals that configure the urban landscape of the city in its intersections with the agricultural lands of the Nile Delta. These canals have attracted urbanization and informal settlements. The latter have gradually installed on the edges of these channels and thus became a source of pollution, waste and environmental hazards. Some of these canals are still in use, others are used for other purposes or have been totally abused. This occurs due to the absence of development regulations and control.
Agricultural lands are replaced over time with the gradual encroachments of buildings and streets, thus they gradually lose their functions, identity and the opportunities to utilize these unique peri-urban spaces and interfaces. The result is a particular model of urbanization based on agriculture land sub-divisions created by the spontaneous dynamics of construction. This phenomenon of the expansion over agricultural lands is, as P. Panerai noted in 1997: “far from being marginal, but on the contrary, the majority was for the provision of housing”. The result is a very dense urban fabric where the coefficient of the built up area is very high. The inhabitants of these new residential districts suffer from a real lack of space and vegetation despite the availability of agricultural land and the proximity to the Nile.

The seminar on “Linear Parks and Urban Ambiances” attempts to discuss the “linear parks concept” as a new approach that addresses the increasing problem of informal settlements along the water canals. The concept has been applied in similar urban contexts in several countries such as in Sao Paolo, Brazil and Bogota, Columbia and had positive results. The seminar aims at introducing this concept in the urban context of Cairo while discussing the possibility of applying such approach on water canals (rivers, irrigation and drainage canals and their branches) that are considered important elements of the city’s urban fabric in an attempt to help overcome the increasing problem of informal settlements.

The linear park concept is considered here as an applied field for approaching “urban ambiances”. Space ambiances is based on studying the sensory configuration of the urban context through adopting three dimensions: (1) the spatial dimension (urban form and landscape), (2) the sensory dimension, which includes how to recognize urban spaces by different senses (audio, visual, olfactory and tactile) and also body movement in the space, and (3) the social dimension, which examines the impact of urban spaces on social behavior and induces certain relationships among space users.

In this optics, the seminar is interested in the role of water as a creator of an ambiance. Water is not limited to being a visual component, but it is a "former" that produces a specific ambiance. It configures a particular landscape both by its physical qualities: fluidity, humidity, sound, reflection, etc.; and by the life it brings. That is, transforming the banks of the waterways into linear urban spaces of combined green and blue landscape elements along the ‘legacy’ waterways will, at first, revive the water identity and highlight the importance of the water element in the urban environment and its ability to create new urban atmosphere. Secondly, it will help improve the quality of life in the surrounding context through the creation of public spaces, especially in informal areas that mostly suffer from high density and lack of urban spaces.

A scientific Franco-Egyptian collaboration was initiated in January 2014 between Ain Shams University, Faculty of Engineering, Department of Urban Planning and Urban Design (DUPUD) and Grenoble School of Architecture (ENSAG), Cresson Laboratory (Research Center on Sonic Space & Urban Environment, UMR CNRS 1563 Ambiances, Architectures, Urbanités) in France, as a part of the “Imhotep program”. The latter is funded by Campus France and the Egyptian Academy of Scientific Research and Technology.
The concept of Linear Parks was discussed during the workshops that took place in Cairo, Nantes and Grenoble and was seen as an opportunity to address the challenges of informal settlements in Egypt and elsewhere. 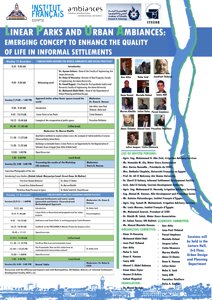 NGO, Director of Projects at Ressala Nour ala Nour

This workshop is a part of the international seminar that was held in Cairo, Egypt - Monday 14 December & Tuesday 15 December 2015

The workshop tackled the concept of linear park; the combination of water and vegetation (blue-scape and green-scape) as creators of specific ambiances. The context was mainly the irrigation and drainage canals that configure the urban landscape in its intersections with the agricultural lands of the Nile Delta. These canals have attracted housing and sped up the informal urbanization process on the peripheries, with a substantial increase of rural-urban influx to the capital. Accordingly, these canals become a source of pollution, waste and environmental hazards.

Al-Maryouttia Canal – expressing the presence of water as a potentiality – in its intersection with Al Mounib Bridge was selected as a case study (See the map). The objective is to define this public space, in terms of urban ambiances. The main approach to determine the existing ambiance is though studying the human behavior, body presence in space; postures, gestures, mobility, walkability, etc. Defining the ambiance was tackled via photography as a main methodology upon which different themes that could describe ambiences were interpreted.

By the end of the workshop a two-day expo photography took place at the Department of Urban Planning and Urban Design. The main theme of the exposition was to show the existing ambiance along the banks of Al-Maryoutia canal at the selected region. It was an interactive exposition where the attendants were asked to comment their perception of the photos scripturally.  Photos of the canal were presented in the form of postal cards where a space for comments was left.

The objective of that round table, that took place at the last session of the seminar, was to put the two notions linear park and urban ambiances into debate. The issue was multidisciplinary and inter-sectorial; as professors and practitioners with different discipline backgrounds as well as representatives of different ministries were invited. NGOs (non-governmental organization) dealing with water element within cities such as the (Message: Light upon light) and others existing in Al-Fayoum Governorate were also called for.
All the attendants, together with some university professors and students, shared their opinions through a bilingual debate (Arabic-French). The whole session has been translated (Arabic-French) and vice-versa. The debate has focused on the different potentials and challenges to transform the banks of Al-Maryoutyia Canal into a linear park.